There are really two parts to network planning. One is the physical connectivity: how do you connect everyone together? The other is the issue of equipment: what equipment do you buy, how do you configure it, and crucially how do connect your network to the larger internet? Here, we assume that you have found somewhere that you can connect to the internet – your backhaul – and you now want to build the network that connects the community to the backhaul.

Networks typically consist of two kinds of links with the rather obvious names of point-to-point and point to multipoint. Point-to-point links typically consist of two focussed antennae – maybe parabolic dishes and are used for links that carry a lot of traffic over long distances. Point-to-multipoint links are used for distribution to a community and usually consist of a sectoral antenna (a small version of the things you see on mobile phone masts) together with a number of receivers in the community. 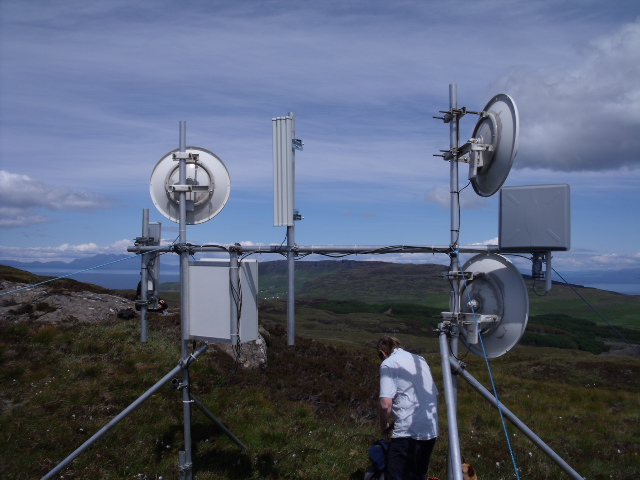 One of the relatively recent developments in wireless technoloy is one usually gets the antenna, the wireless and a processor as a single unit, so to build a relay, one simply connects such units together with ethernet cables that carry both signal and power.

Let’s assume that you have found a place B that you can get a good connection to the internet and a small community C to which you want to deliver broadband. Let us also assume, unlike the happy situation in the introduction, that there is no line of sight between B and C, so you want to find a place for a relay R which can “see” both B and C. The plan would be to build a point-to-point link from B to R and mount a sectoral antenna at R to provide a point to multipoint link with each member of the community at C.

Of course, you could walk around in the hills looking for a site for R, but this can be hugely time-consuming, and over distances of 10 miles, it often hard to make out what you are looking at – even in good weather.

One of the most useful tools for locating relays is a viewshed program. What this does is colour a map with all the places that are visible from a given point. So the idea is that we would paint all the areas visible from B with one colour and paint all the areas visible from C with another colour. Then any place that is coloured with both colours is a possible position for a relay. Here is a simple example. When we started the Tegola project we wanted to connect Sabhal Mòr Ostaig on Skye to the small community of Arnisdale, a distance of over 20km.

You can see from Figure 1 that there are 300m high hills in the direct line of sight, and putting relays on the tops of these hills is not a good idea. They are inaccessible and a long way from any power source. Instead, we wanted to find a point nearer to Arnisdale to site a relay.

There is a nice program at HeyWhatsThat that produces viewsheds that you can view in Google Earth. Figure 2 shows part of the viewshed from Sabhal Mòr Ostaig as an area shaded in red. You can see that Arnisdale, in the top-right corner is not visible, but the mountainside nearby is.

We can also do a viewshed from Arnisdale and combine it with that from Sabhal Mòr Ostaig. In Figure 3, we have zoomed into Arnisdale, and have coloured the viewshed from the centre of Arnisdale in blue. The overlapping areas appear in purple. These are the possible sites for a relay; and R marks the spot at which we actually sited the relay. 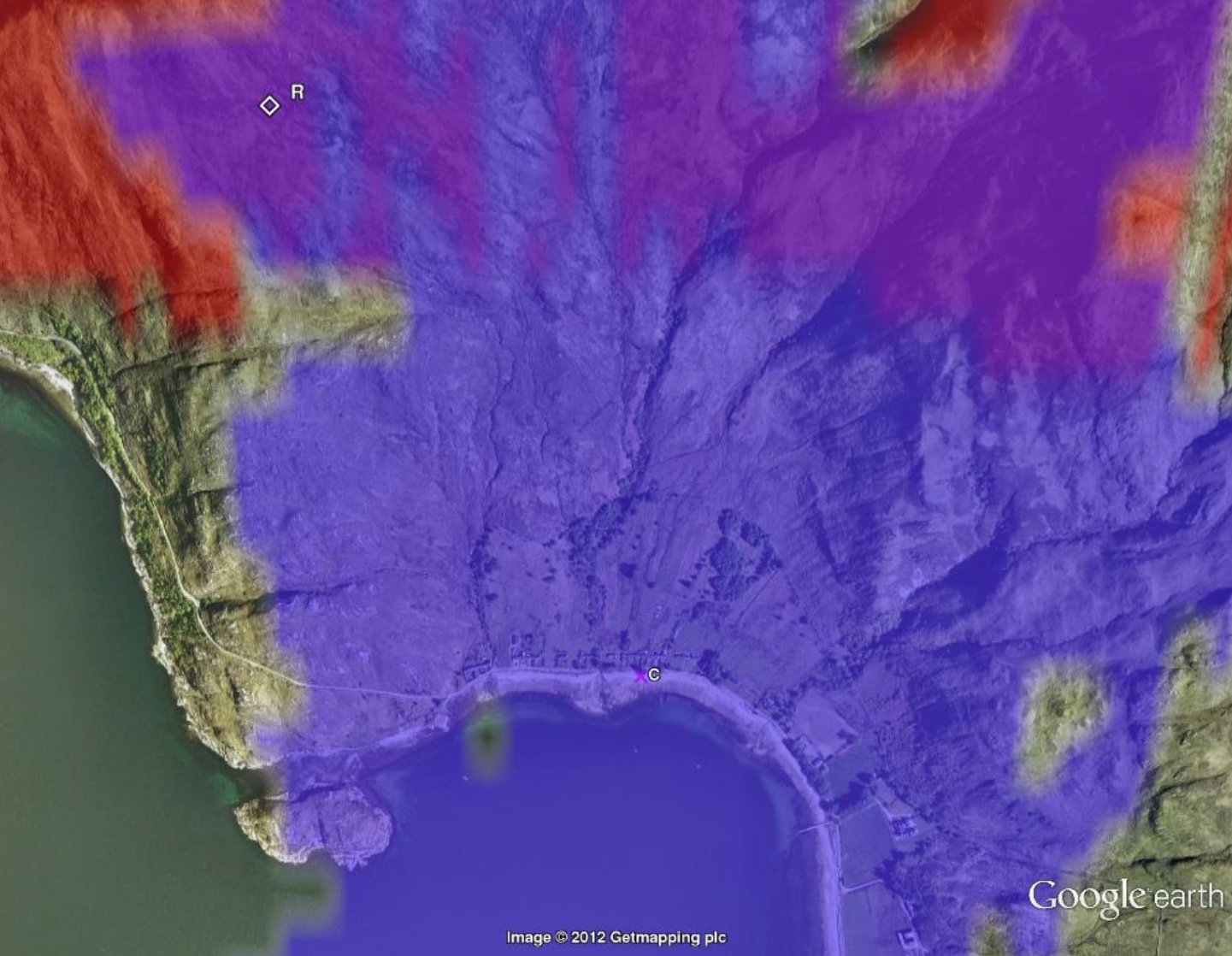 At this point I should confess that this was not how we actually found the site. We found it by walking around the mountainside on a clear day looking for a suitable place, because at that time we didn’t know of any suitable viewshed programs. In fact, the viewshed shows some sites that might have been better. The moral is that it is well worth playing with viewsheds before slogging your way up mountains!

The choice of site is governed by a number of factors. Shorter links are better. Ease of access is an obvious consideration as is getting a power supply. As we describe in our section on power cable, even over distances of a mile, it may be better to run a power cable than to use solar and wind energy.

There is another important consideration: to get the best performance from wireless equipment you need more than just line of sight there is a “zone” around the line that should, if possible, be free of obstructions. This described in our section on Fresnel zones.
This is why our choice of site is not right at the edge of a purple area in Figure 3. Having established a possible position for a relay, do a viewshed from that relay, and also use Google Earth to check that the lines of sight are sufficiently clear of the ground.

HeyWhatsThat is a great tool, but I had to monkey with the output to get a viewshed in some colour other than red. It would be really useful if the people who wrote the program would provide a choice of colours and also, perhaps, allow one to do multiple viewsheds. 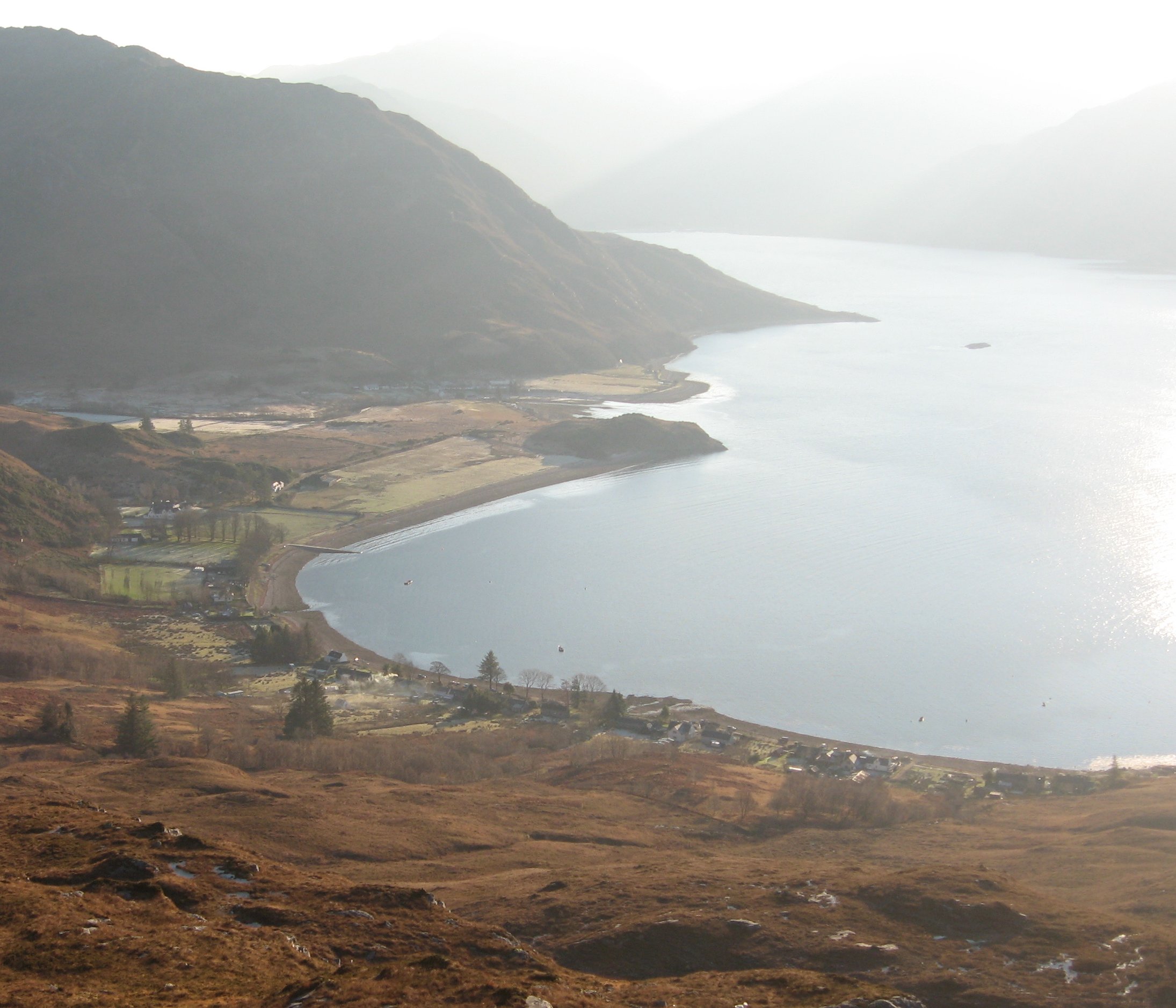 View from the relay to the community 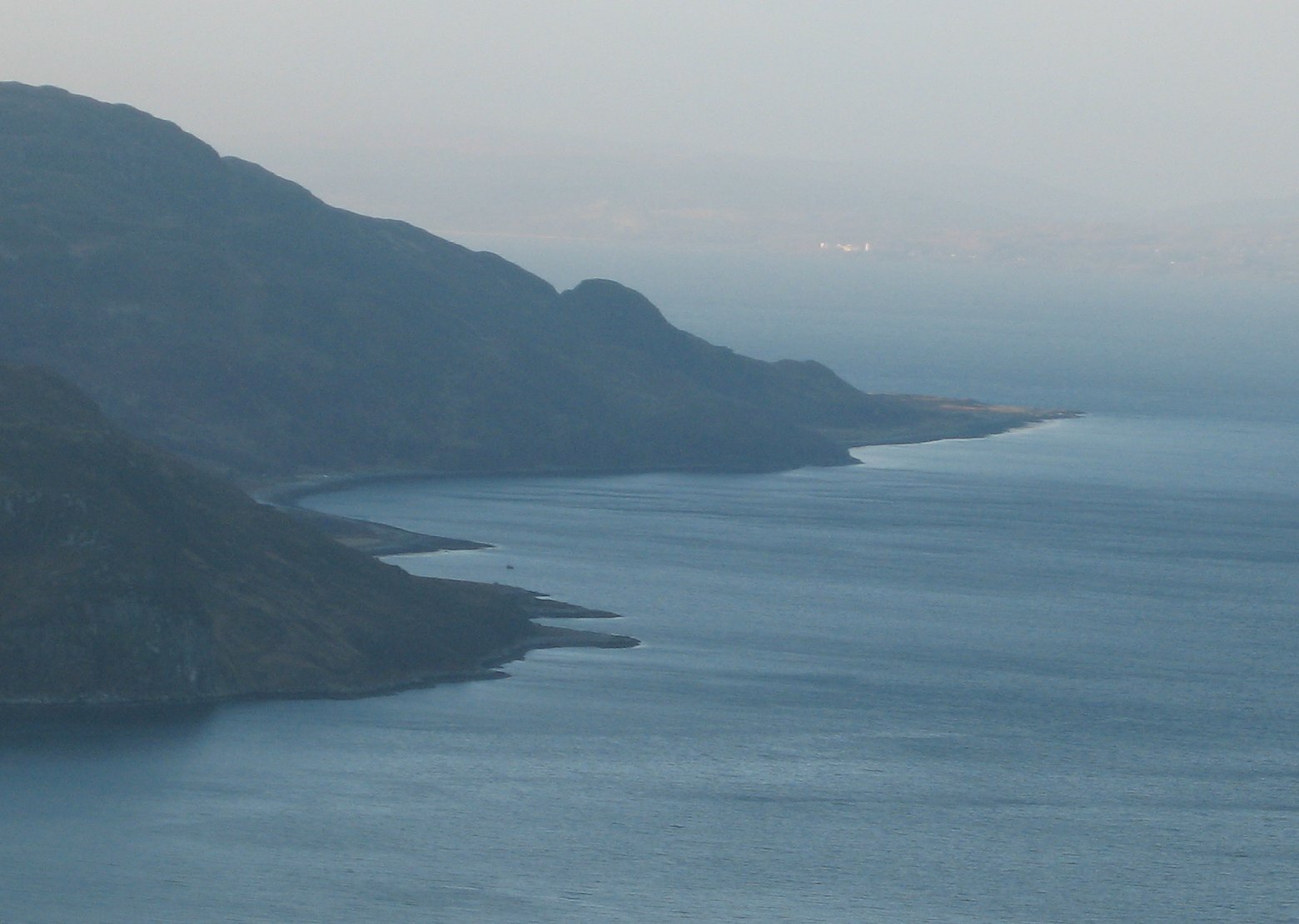