A Brief History of the Tegola Project

The Tegola project started in 2007 when three of us, academics from the University of Edinburgh decided to start up a research project on the delivery of low-cost, reliable and high speed broadband in rural areas. It is entirely uncoincidental that one of us has a house in a remote village that was then without broadband. 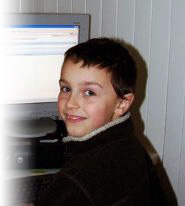 In November 2007, together with some colleagues, we erected a wireless link from Isleornsay to Corran, a distance of about 10 miles, and for one glorious weekend, thanks to a resident of Isle Ornsay who let us use his Internet connection, brought broadband to a couple of houses in Arnisdale and Corran. Alas, we could not keep that connection, and at that time the Scottish Government was unwilling to help us obtain one that would serve the community.

Fortunately, because it was a research project, we were able – thanks to help from the University of the Highlands and Islands (UHI) and from Sabhal Mòr Ostaig – to obtain a connection to the Internet via the academic network Janet. Although this was great for our research because Janet could offer much higher speeds than anything that was available to domestic consumers, Sabhal Mòr Ostaig is not in an ideal position. It is further away from Corran (over 13 miles) and there is no line-of-sight for wireless transmission. In fact the lowest point that can “see” both Sabhal Mòr Ostaig and Corran is over 300m up the side of Beinn Sgritheall, and not an easy walk. Amazingly, one afternoon in very early January 2008, a group of about eight residents of Arnisdale and Corran, all somewhat the worse for wear from Hogmanay celebrations turned out and, in the space of a few hours, climbed the hill and erected our first relay. It was then that we realised the importance of community involvement to the project.

By the summer of 2008 we had completed the research testbed, a ring of five relays, and a number of research projects were started as described on our research pages. We also “borrowed” a number of retired desktop PCs from our department, the School of Informatics, and gave them to members of the community. This turned out to be by far the best way of getting people of all ages to use the internet. The younger members, especially the children, needed no instruction and taught the oldies. In addition to research, we gained a huge amount of practical experience in building networks that is described on our howto pages. 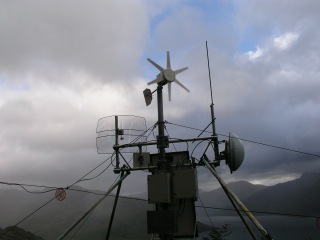 Our first attempt at a relay

Tegola was frequently in the news, it had substantial press coverage and it was one of the stimuli for the Royal Society of Edinburgh’s Digital Scotland report; though it failed to make any immediate impact on Scottish Government policy. Please see the Tegola news pages for some of the more interesting publicity.

The next major event took place in the spring of 2010, when we were approached by Simon Helliwell on Eigg. The people on Eigg had been frustrated by various attempts to get satellite connections from companies that went belly-up. Although the latest offering, heavily subsidised by the Scottish Government, looked as though it would be more stable, the performance was so bad that they turned to us for help. We lent them some equipment and rapidly erected a test link, which performed perfectly. We had hoped that, just as Tegola was getting its connection through an educational network, that Eigg could get its connection through another educational network, Pathfinder, through Mallaig High School. Unfortunately Highland Council, which one might think would show more commitment than universities to local communities, did not see it this way, and the Small Isles had to make do with a bunch of BT lines in Arisaig – not nearly as good as what Tegola was getting, but much better than their satellite connection. For more detail on this see the Hebnet Web site and a presentation on the history of Hebnet.

By the middle of 2011 it was clear that we could no longer use our research projects as the sole reason for providing long-term backhaul to what was now a successful network upon which the community relied. We either had to formalise our arrangement with Janet or, like Hebnet, fall back on relatively slow BT lines, which would be a pity because our networks are capable of delivering speeds that are well above the best domestic speeds that are available in the UK.

Then there were a number of happy coincidences. First, JANET started to modify its policies to give Universities more freedom in what they could do with their Internet connections; second UHI said that it would be willing to provide backhaul for us on a permanent basis; and third Sabhal Mòr Ostaig, which had always been very supportive and helpful, gave us a “wall” on which we could mount antennae. The catch was that we would have to pay UHI for backhaul bandwidth; in that part of the world, bandwidth is not cheap, and State Aid rules mean that the University cannot provide a cheap connection which would undermine any future commercial providers. Fortunately Marine Harvest, a company with at least two stations in the general Tegola/HebNet region stepped in as a commercial customer of HebNet which means that the cost can be afforded. This is an ideal example of industry-community collaboration: each side needs the other. We are now combining the Tegola and HebNet networks, together with South Knoydart so that we can use all our connections to the Internet for both speed and reliability.

So that’s the Tegola story to date. As described on our home page we are helping, directly or indirectly, quite a large number of community broadband projects in Scotland. The research continues, but the community aspect of the activity has now been taken over by HUBS for which we have funding from the Carnegie Trust, and the news is even more promising: Scottish Government is announcing a community broadband support scheme, and we hope to work with them.

But, just in case you think that the story has a completely happy ending, please remember that the main issue has been getting our backhaul. We have been moderately lucky; but for much of Scotland the necessary infrastructure is lacking, and until that infrastructure is in place, community networks will not realise their full potential.